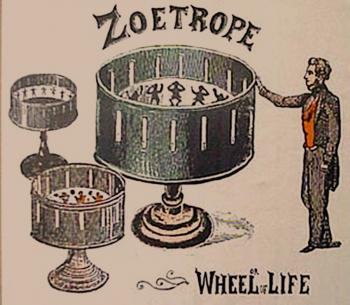 In 1834 the English mathematician William George Horner built the daedaleum, also known as "wheel of life", but mostly as zoetrope, because the first animated strips that were created representing movements of animals. Etymologically derived from the Greek zoo (life) and trope (movement).

The zoetrope consists of a hollow cylinder perforated with several vertical slots (as many as the animation drawings presented in the band) and into which the band is placed against the wall of the cylinder. In doing spinning on its axis and looking through the slots, the sequence of drawings, thanks to the persistence of vision, is transformed into a single movie clip.

While Zootrope provided no technical innovation regarding Plateaus phenaquistiscope is much more manageable and allows multiple viewers, located around its perimeter, contemplate the scene.

Our zoetropes are a recreation of those made on nineteenth century. They are made of wood, metal or cardboard as the originals and are accompanied by 30 different bands, playing also the original animations which would include these original zoetropes.

Add to Wishlist Buy in just one click
60€
1 Product