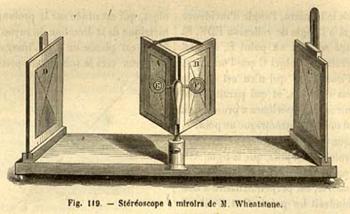 Binocular vision (from Latin bini, oculos double eye) is one in which both eyes are used together within the same visual field, thus creating a single three-dimensional image. Each of our eyes sees a slightly different image, our brain being responsible for putting them together to create a single (stereopsis) giving the image a volume through which we are able to calculate distances.

Stereopsis was defined by Englishman Charles Wheatstone in 1838, and he was the inventor of the stereoscope, which consisted of large mirrors reflecting two images (one for each eye) creating the illusion of depth. Somewhat later the also English David Brewster (also inventor of the kaleidoscope) simplified Wheatstone apparatus in 1845.

It was from 1851, in which Queen Victoria, at the Universal Exhibition held in London, was very interested in stereoscopic photography, these devices started to be very popular throughout Europe. The American poet and physician Oliver Wendell Holmes who introduced it in the U.S., creating his own production line, being very popular use until almost the 20s.