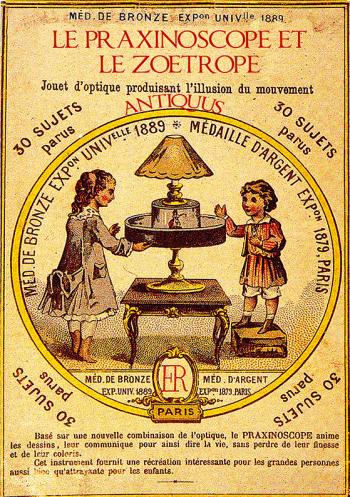 The praxinoscope is an optical toy invented by Emile Reynaud  in 1877 and consisting of a rotating drum in its  center, and around the axis of rotation, there is  a mirror set (usually a dodecahedron) . As each mirror reflects one of the pictures that form the animated strip we will place attached to the wall of the drum, .the viewer looking over the edge of the cylinder, by turning the device, will see, thanks to the persistence of the retina , move a single complete figure, located right in front of him.

Emile Reynaud was increasing over the years, the performance of his device, creating the praxinoscope lamp and praxinoscope theater.

At first he joined a candle, keep in mind that by that time had not yet implemented the electricity for domestic use, so if you wanted to enjoy the praxinoscope during the long nights of winter it was necessary to illuminate the scene directly and what better than a candle just above the drum.

The praxinoscope theater, consisted of a wooden box that served as a black box, in which the praxinoscope stood. The box provided on its upper lid of a small window that did match with th mirrors set, so that the viewer saw only in the center of the window the animation scene without peripheral images distract the attention, box was provided of  a series of interchangeable sets that gave room to the scene.

In 1888 he stepped forward and invented the optical theater, in which images were projected praxinoscope publicly on a large screen.

Eadweard Muybridge (1830-1904) British photographer, patented the zoopraxinoscopio. Based on the photographic studio he had done on the motion galloping of a horse, created this device It consisted of a series of glass disks on which these photographs are printed, to rotate them and projected on a screen was obtained the real  horse in motion. Since there was only a step to the Lumiere brothers invented the cinema.

We have several praxinoscopes according to their size and decoration, also available with music.

The larger sizes are fitted with 50 different animations of the time, small 30 .

All are provided with a brochure with the history of praxinoscope and neatly packaged in a cardboard box illustrated, to make a perfect gift