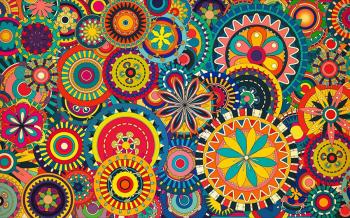 The word Kaleidoscope comes from the Greek Kaleido (beauty) and Scopio (picture, vision). This etymology does justice to this object as infinite are the beautiful images produced with a little twist of your hand. Since ancient times there have been studies about reflection symmetry.

The early Egyptians strategically placed at angles of 45 , polished limestone to watch with fascination the mandala-shaped figures that emerged from the meeting of different images. However it was not until the nineteenth century when the multifaceted English David Brewster, locked in a tube three mirrors in the shape of triangular prism separated by glass and in the small chamber formed with the end of the tube introduced small pieces of glass of different colors, looking at them from the opposite side and thanks to the reflectance of the three mirrors created countless beautiful images.

David Brewster was an expert in optics and the physics of light, remember that his studies of the stereoscopic vision were fundamental instrumental in creating stereoscopes that years later spread throughout Europe as did the kaleidoscope. He patented his invention in 1816 and in 1870 had already been introduced in the United States and spread throughout Europe. Today it remains a fascinating subject for any age and any culture. You only need to apply your eye to the viewfinder to start enjoying the vast range of colors and shapes that are created as we turning it

Add to Wishlist Buy in just one click
40€
0 Product

Add to Wishlist Buy in just one click
40€
0 Product

Add to Wishlist Buy in just one click
40€
1 Product