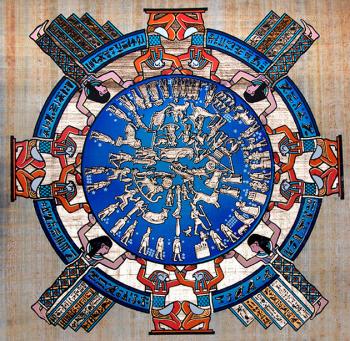 Etymologically the word calendar comes from the Latin word Kalendae, that means the first day of each month. The oldest known calendar was found in a Mesolithic monument in Aberdeenshire, (Scotland) by British archaeologists. It is believed to date from about eight thousand years BC, and measures the time from the phases of the Sun and the moon.

The Egyptians developed the most accurate calendar of antiquity, to set the duration of the year a total of 12 months of 30 days each, which added 5 additional days almost perfectly fit the length of the tropical year. This was not the Babylonian , Greeks and Romans calendars, whose calculations were far from certain, being forced to make continuous adjustments, if we consider that a calendar is nothing more than a way to organize the time in order to make natural cycles , like seasons, to coincide every year exactly the same day.

For example the Romans came to accumulate an error such that marked the beginning of winter to spring. Julius Caesar was the emperor who in 46 BC commissioned to the astronomer Sosigenes the development of a new calendar. He implemented the Egyptian calendar, to which added an extra day every four years, creating a leap year, in his honor the romans gave to Quintilis month his name and so was called thereafter Julius (July). After the assassination of Caesar and by mistake for several years it was applying a leap year every three instead of four years.

Was this time the emperor Augustus who was commissioned to make the correction and hence the month of Sixtilis was called in honor to him Augustus (August). At the same time they gave arbitrarily as the beginning of the year the month of January, since January 1st (Januarius) was dedicated to the god Janus,, but from the astronomical point of view this day is totally inconsequential

The Julian calendar year lasted 11 minutes and 14 seconds longer than the tropical year by accumulating an error of 1 day every 128 years, so that in 1582 the accumulated error was 10 days. Pope Gregory XIII was concerned that Easter did not coincide with the beginning of spring, sent adjust the calendar astronomer Christopher Clavius (1537-1612) who after making the calculations, he recommended to the Pope the subtraction of the 10 days and so October 15 became the October 4, 1582.

The Gregorian calendar is the current and by virtually the entire world is governed. (More information on the calendar and its many curiosities on our Blog).